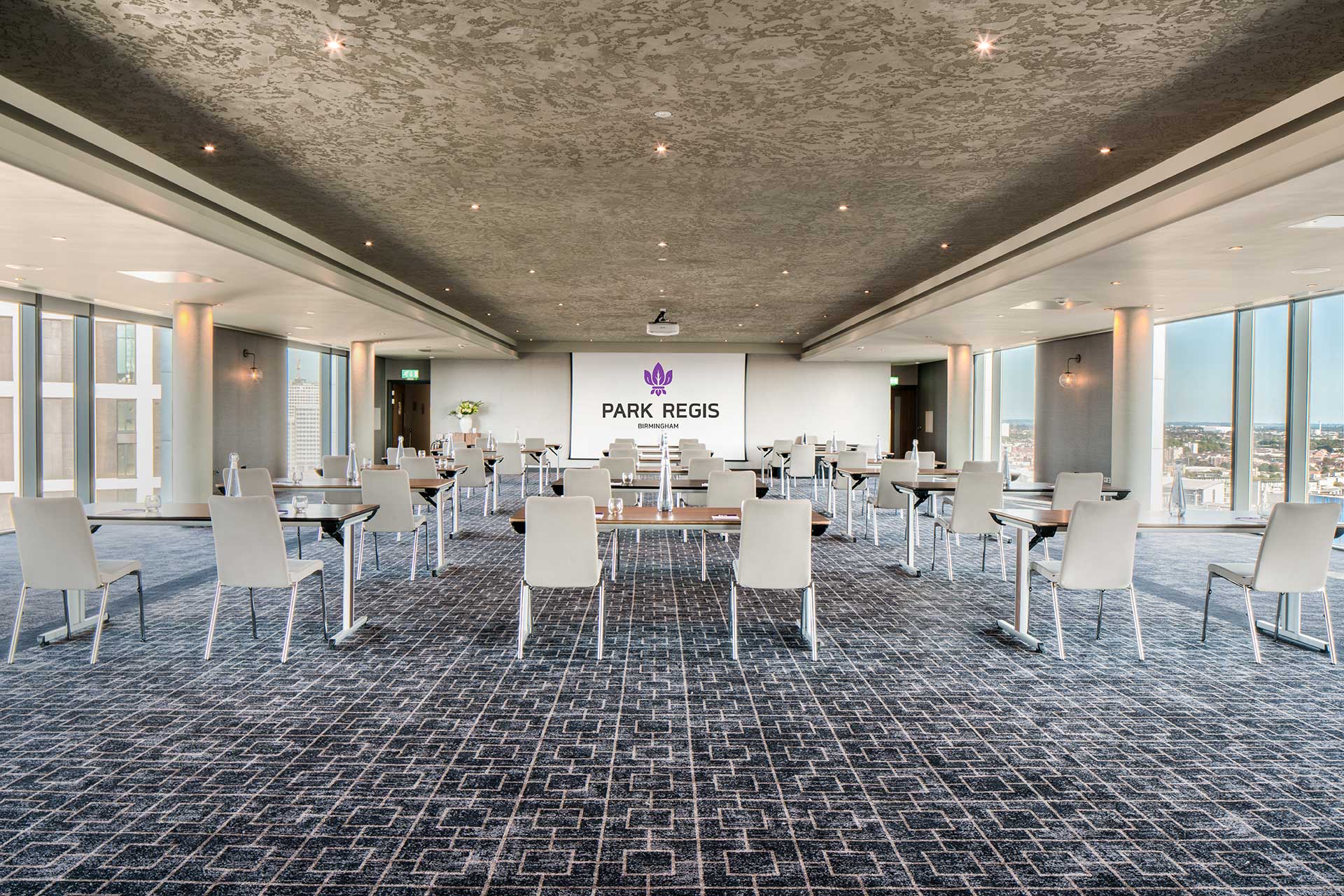 Park Regis Birmingham opened its doors in April 2016, an amazing transformation of Auchinleck House from a run down office block to one of Birmingham’s most luxurious hotels. With a rebuild cost of over £50m the transformation resulted in a stunning addition to the Birmingham skyline.

As part of the development, a Japanese themed bar and restaurant, Rofuto was built on the 16th Floor with panoramic views across the city centre and beyond. Initial interest was substantial, and a lengthy waiting list formed as the restaurant got closer to opening its doors. With fierce competition from a thriving city centre filled with restaurants, bars and other eateries Rofuto struggled to maintain a high level of covers and the profitability of the premium space in the hotel was called in to question. In 2018 the decision was made to utilise the space in a way that would significantly change the dynamics of the hotel and create one of the most in demand conference spaces in the city.

Level 16 @ Park Regis came as a result of 6 months analysis and was project managed under the name “Project Altitude”. With a further £750,000 of investment all plans were put in place, the refurbishment was confirmed and the sales team started to sow the seeds in the market for what was being born, using the strapline “Take your events to the next level!”

Not only did this change in strategy deliver higher revenues and profits but it also meant a significant change in the type of business the hotel would take. No longer reliant on lower revenue generating business Park Regis Birmingham was able to accommodate meetings with over 200 delegates, vastly exceeding the covers that Rofuto was in a position to deliver.

As word spread, demand grew and ultimately profits did too. The profitability of Level 16 increased from -16% as an operating profit in a restaurant guise to 32% as a meeting and event space.

As a “go to” destination Level 16 has firmly established itself as a place to meet, to entertain and to celebrate, not just in the city centre but further afield across the West Midlands. Significant business events have taken place and are also scheduled for later in 2021. In the first year of opening the hotel accommodated 8085 residential conference rooms, in 2019 this had increased to 12,204 which is a phenomenal achievement, driven by the desire and passion of the Park Regis sales team.

Park Regis received the Business Desk Midlands award for investment in 2020 and also received a Trip Advisor certificate of excellence while also becoming accredited as a specialist Pharmaceutical and Healthcare events venue, the only venue in Birmingham to have received such accreditation to date. In addition to this Park Regis won Best Independent Venue in the 2020 Conference & Hospitality awards and were awarded the 2020 Trip Advisor Travellers Choice award putting Park Regis in the top 10% of hotels in the UK.

Despite Covid-19 ripping apart the hospitality industry through 2020 Park Regis Birmingham has continued to stay open for critical business meetings and has worked with the UK government to share best practice for safe reintroduction of larger meetings. Under the wing of Switch Hospitality Management, the future remains bright and as soon as meetings can take place safely the hotel will no doubt return to its enviable status as one of the main meeting spaces in the West Midlands.